Three tons of thyroid glands and a girl named Margaret Tracy: The odd origins of medications

Drug discovery is a weird beast. These days, it's all about rational design, which means establishing a useful target in the body (e.g. an enzyme that does something that you'd like to stop or at least slow down) and then screening a truckload of chemicals for the best fit. A more traditional approach to drug discovery is to isolate and characterize chemicals present in plants of known medicinal value (e.g. morphine from the opium poppy). Then there is your classic scientific curiosity coupled with a healthy heaping of serendipity, which is surprisingly prevalent throughout the history of drug discovery.

Here are some of the more interesting drug origin stories I've come across:


- A couple of folks studying how bacteria reproduce in a liquid medium used a platinum electrode to zap them with electricity (cisplatin, a platinum-containing anticancer drug, was produced by the zap and inhibited the ability of the bacterial cells to divide in two after making a copy of their insides, pointing to a similar effect on fast growing cancer cells) (Rosenberg et al., 1965; Williams and Whitehouse, 1979)

- Three tons of thyroid glands from slaughtered pigs were reduced to 33 grams of an iodine-containing molecule by a presumably very patient researcher (thyroxine, a hormone produced by the thyroid gland that essentially regulates how hard the body works) (Kendall, 1919; Harington, 1926) (see also: extracting insulin from pig pancreas glands) 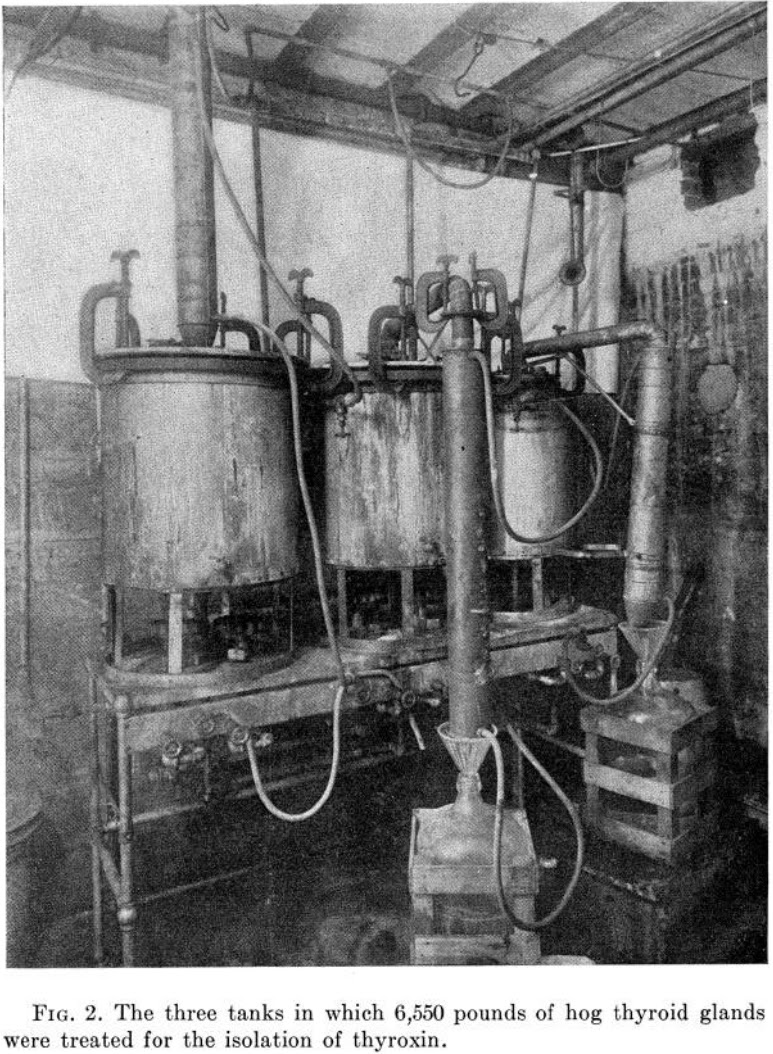 - Cows began bleeding to death after eating mouldy hay (warfarin, an anticoagulant, was derived from a toxin produced by the mould growing on the hay) (Stahmann et al., 1941; Mueller and Scheidt, 1994)

- Tissue was removed from the badly broken and infected leg of a girl named Margaret Tracy (bacitracin, an antibiotic, was produced by a bacterium inhabiting the tissue) (Johnson et al., 1945; Anker et al., 1945; Google News)

- A solvent that had been in use for decades was used to dissolve compounds being tested for preventing seizures and was found to be itself responsible for the observed effects (valproic acid, an antiepileptic and mood-stabilizing drug) (Meunier et al., 1963; Peterson and Naunton, 2005)

- A Canadian physician, who as a graduate student contributed to the discovery of insulin, was given an envelope of leaves from a plant traditionally used in Jamaica to treat diabetes by a patient who knew of his interest in the disease (vinblastine, an anticancer drug, was isolated from the plant after he passed the envelope on to his brother, a scientist, and one of his workers noted that an extract from the plant caused infections in animals by decreasing their white blood cell counts) (Noble et al., 1958; Wright, 2002)

- Spanish conquistadors came across a tree in the Caribbean and shipped its resin (called guaiac) to Europe as a purported cure for syphilis (guaifenesin, a drug that facilitates coughing up gunk when you have a chest cold, was derived from the resin) (Dicpinigaitis and Gayle, 2003; López-Muñoz et al., 2006)

- A professor from the Philippines grew up hearing stories about killer snails (Conus magus) capable of paralyzing and eating fish (ziconotide, a painkiller derived from a cone snail toxin) (Smith and Deer, 2009; PNAS)


- A bunch of factory workers exposed to a chemical used to speed along the manufacture of rubber started feeling like crap within minutes of drinking a single glass of beer (disulfiram, used to treat alcohol dependence) (Williams, 1937; Suh et al., 2006)

Kendall EC. 1919. Isolation of the iodine compound which occurs in the thyroid: First paper. Journal of Biological Chemistry 39:125-147.

Peterson GM, Naunton M. 2005. Valproate: A simple chemical with so much to offer. Journal of Clinical Pharmacy and Therapeutics 30(5):417-21.

Email ThisBlogThis!Share to TwitterShare to FacebookShare to Pinterest
Labels: Drugs, History, Origins
Newer Post Older Post Home
Named for an old skin remedy, Rosin Cerate is a blog about living things. In particular, there's lots on drugs, microbes, and the history of science.